- Create a working demo of the egg hunter


For the 3rd assignment, I will be creating an 'egg hunter' shellcode. This wasn't covered in the SLAE course. As mentioned by a lot of SLAE blogs, a good source is from skape research paper. My shellcode did not deviate too much from what skape has shown. I created some labels to make it more readable and easier to follow the flow of instructions.

What is an egg_hunter? Why do we need it?

This is accomplished by using an 'egg(s)' which is a unique 8-byte opcode (or hex). The egg gets loaded into both the stage 1 and stage 2 shellcodes. When stage one shellcode executes, it searches for the unique 8-byte egg and transfers execution control (stage 2).

Here I globally defined egg with the following and then initialized eax, ebx, ecx, edx registers:


We are now ready to do some system calls. According to skape, two system calls can be used: access() and sigaction(). For this write-up, I will only be using access().

We will be using the *pathname pointer argument to validate the address that will contain our egg.

The first label is used to switch to the next page if an invalid address memory is returned with the syscall...each pagefile/PAGESIZE contains 4096 bytes. This is accomplished using an OR instruction

The second label will be our meat and potatoes. Within this label or procedure, we will be calling the access(2) syscall, compare the results (egg hunting), and loop through the address space.

We compile our nasm file and obtain our shellcode using objdump.

We now have our stage one shellcode and for the stage two shellcode, I will be using the reverse TCP shellcode from SLAE Assignment #2.

I updated the shellcode.c file to include both stage one and stage two shellcodes as seen below.

For testing, I am using my kali box again to receive the reverse TCP shell. We compile our shellcode.c, open a listener in Kali and run the exploit.

Kali Linux Windows Vista Vulnerable application: vulnserver.exe (KSTET) Vulnserver.exe is meant to be exploited mainly with buffer overflows vulnerabilities. More info about this application and where to download it can be found here: http://www.thegreycorner.com/2010/12/introducing-vulnserver.html ~~~~~~//*****//~~~~~~ We get the initial crash using the following fuzzer. ...and we get a pretty vanilla EIP overwrite buffer overflow. Calculating the offset as usual using Metasploit's pattern_offset.rb and pattern_create.rb We have our offset value so at this point we will need to find JMP ESP address and redirect EIP to it. We will use address 0x625011AF . Note that you can use Immunity Debugger's mona.py or just search it manually. Updated POC with the offset value and JMP ESP address. As we examine the crash in Immunity Debugger, we can see the correct offset value and hit our JMP ESP address however, once the jump is taken, our Cs have been truncated. As a result, this only 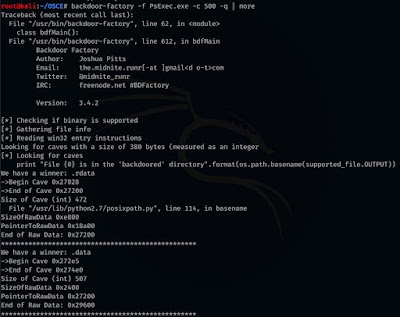 This blog will go over on how to backdoor windows executable.  The intent is to show how a windows PE can be hijacked and introduced a reverse shell while still allowing the executable to maintain its functionality. We will go over how ASLR provides  security feature that randomises the base address of executables/DLLs and positions of other memory segments like stack and heap. This prevents exploits from reliably jumping to a certain function/piece of code.  This is why you shouldn't trust any executables that you are introducing to your system without verifying its source or checksum. References: PortablExecutable (PE): ( https://en.wikipedia.org/wiki/Portable_Executable )  Address Space Layout Randomization (ASLR):  https://en.wikipedia.org/wiki/Address_space_layout_randomization    Executables: tftpd32.exe -  is free,   open-source TFTP server   that is also includes a variety of different services, including DHCP, TFTP, DNS, and even syslog and functions as a TFTP Client as we